So I went on another short trip to the Netherlands. This time, it was not just me, my mom and my brother, but my dad also joined us. We went to the Veluwe, which is a region in the Netherlands close to the German border where there’s a lot of nature. It’s just a two-hour drive, so it was perfect for a short getaway. Since I enjoyed writing about Amsterdam so much, here’s another travel diary! 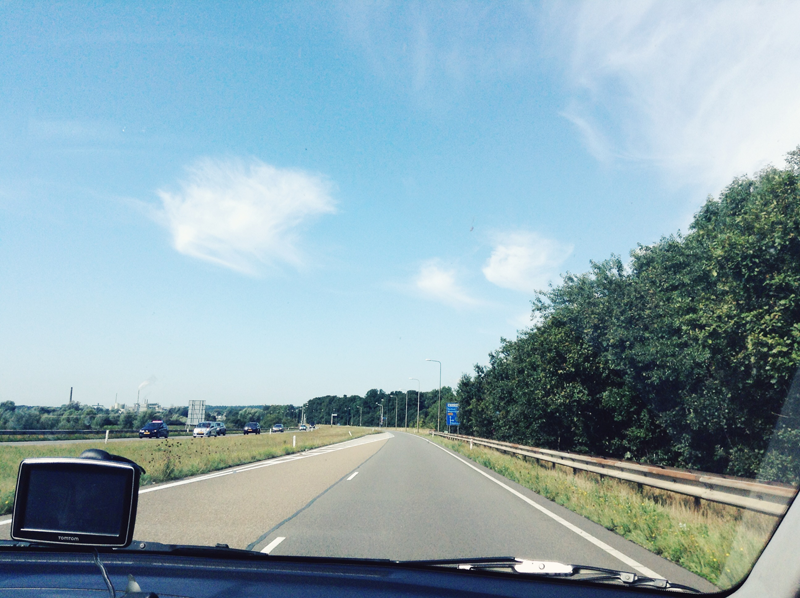 In the beginning of the week, it seemed like the entire North Sea was raining down on our house, but when we woke up on Wednesday, the clouds were gone and the sun was shining. We drove to a place called Renkum and we went for a hike in the woods. With the cold, rainy weather in mind, I had brought a sweater and a raincoat, but it was so warm I could just wear my T-shirt. It was nice to feel some sun on my skin after spending all that time inside this summer. 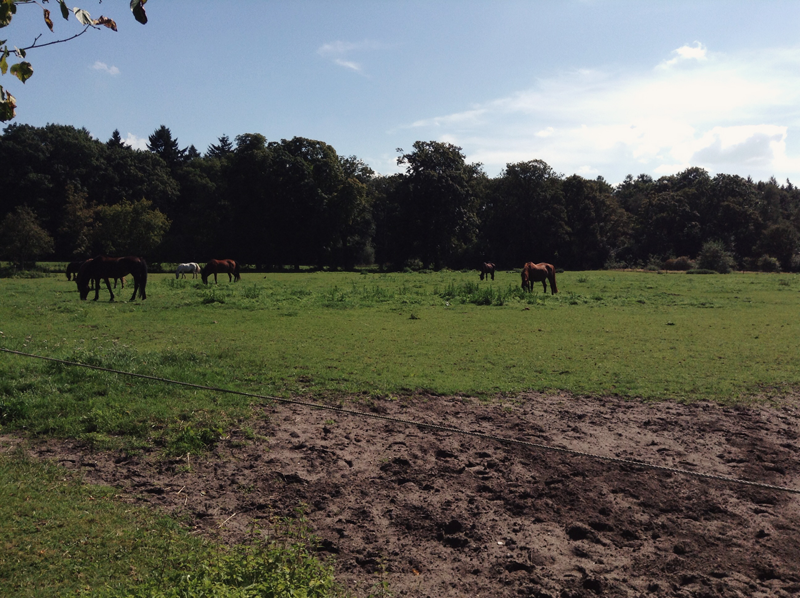 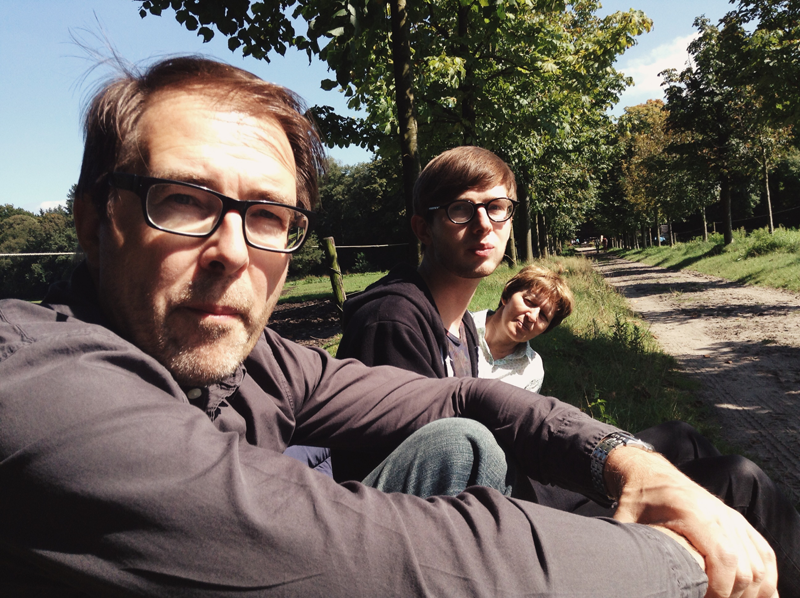 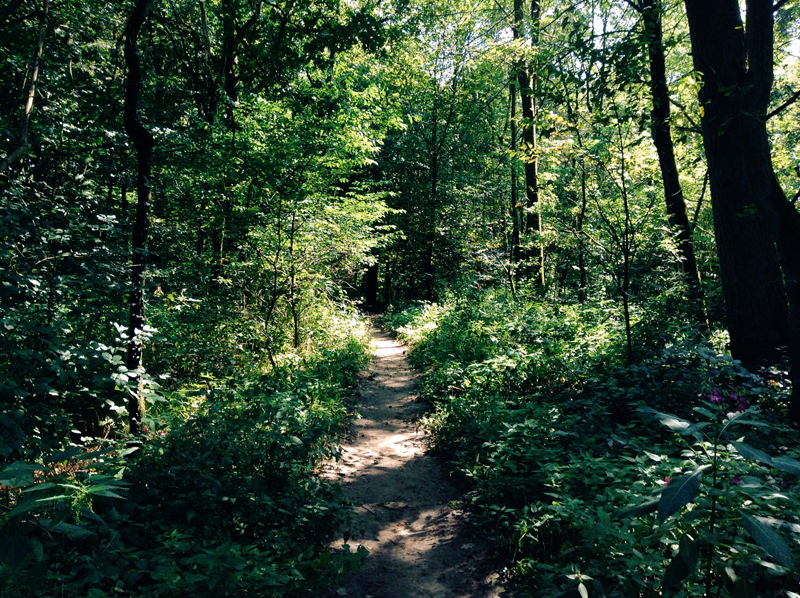 The woods kind of looked like a magical forest. The sun was shining through the trees so beautifully, there was a lot of moss, some mushrooms, there were little brooks and so many different kinds of trees and plants. At some points, the route led through an open field, which looked a little bit more tropical to me. At one point, I even saw a deer running through the field! I don’t think I’ve ever seen a real deer in my whole life, except when I was in a zoo. The hike we were doing was some sort of art themed route and while following this route you could see twelve sculptures of local artists. I didn’t care for the sculptures that much, but they were a nice little extra. 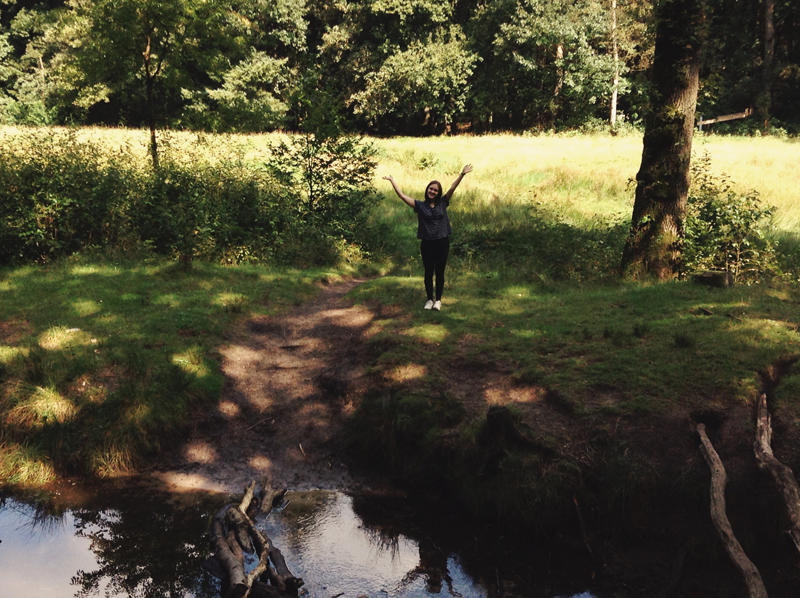 If you want to know more about the art route, you can go to this website (although it’s only available in Dutch). It’s still open until the 14th of September, but I’m sure you can still go for a walk there after that. 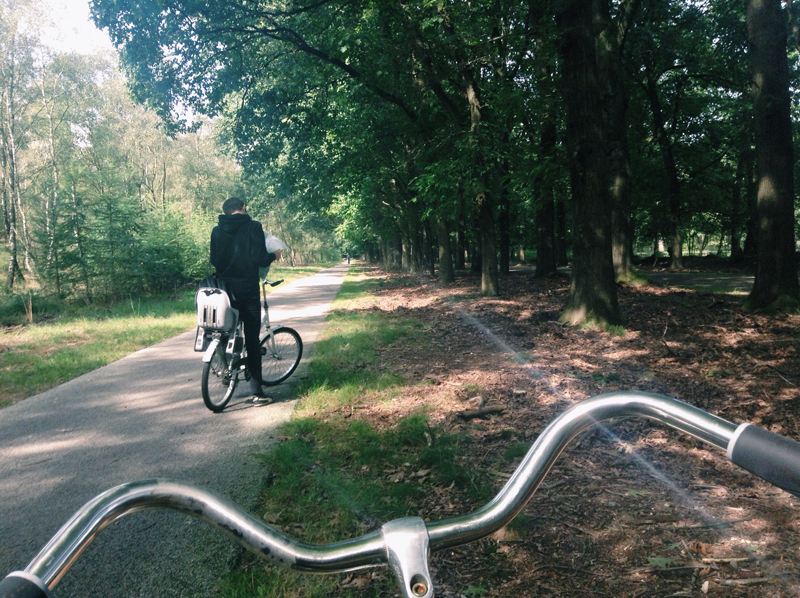 On Thursday, we went to the National Park of De Hoge Veluwe. There were white bikes in the park that you could use for free, so we went for a cycle tour. Just like the ones we rented when we were on the island of Ven in Sweden last summer, these bikes had back pedal brakes (which is kind of dangerous for me, because I’m used to hand brakes) and a child seat, which was a good place for my backpack. The difference, however, was that Ven was a tiny island (about 7,5 square km), and this was a very large park (about 50 square km), so the roads in the park were a lot less overcrowded that the ones on Ven.

The weather was lovely, and it was super nice to bike through the woods and the fields, and I was surprised by how diverse the nature in the park was. There were woods, but also heathland and drift sands. 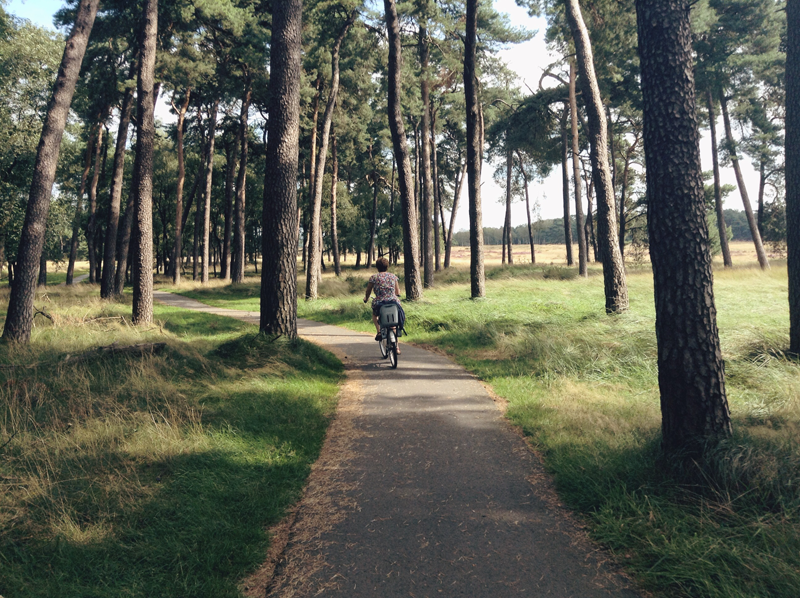 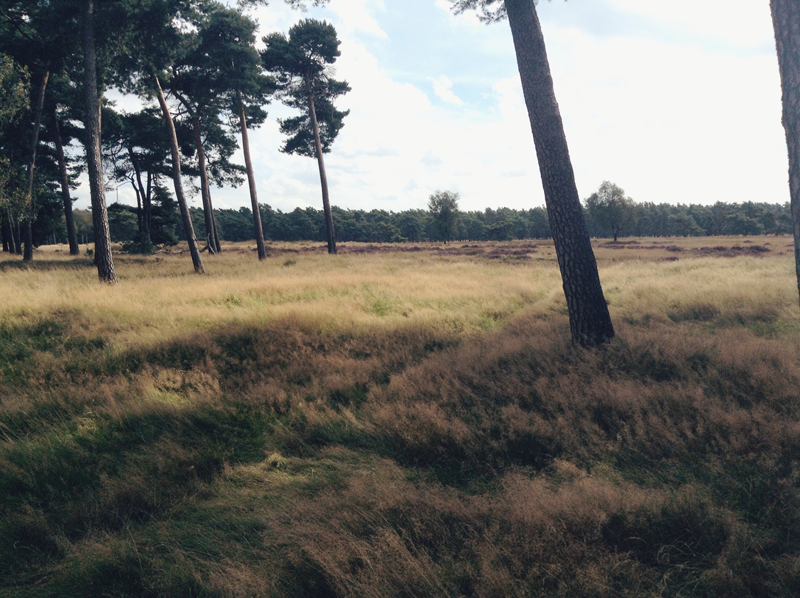 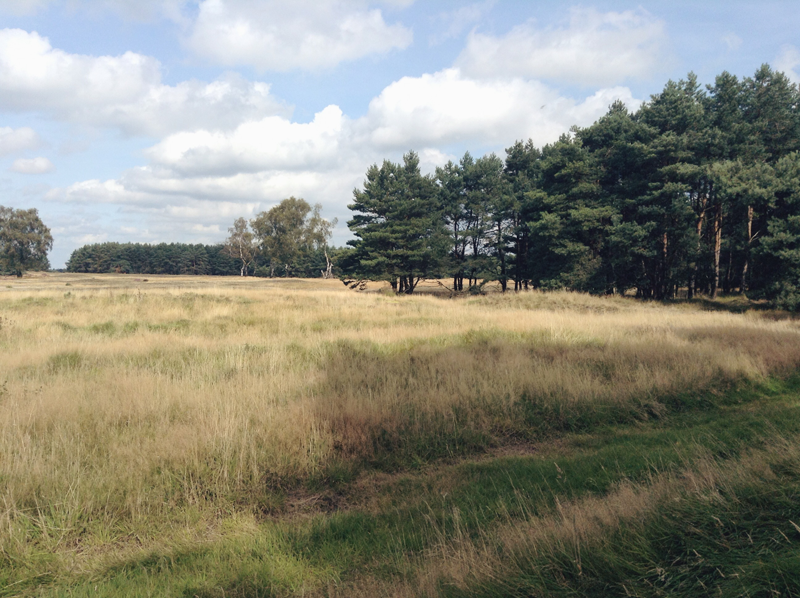 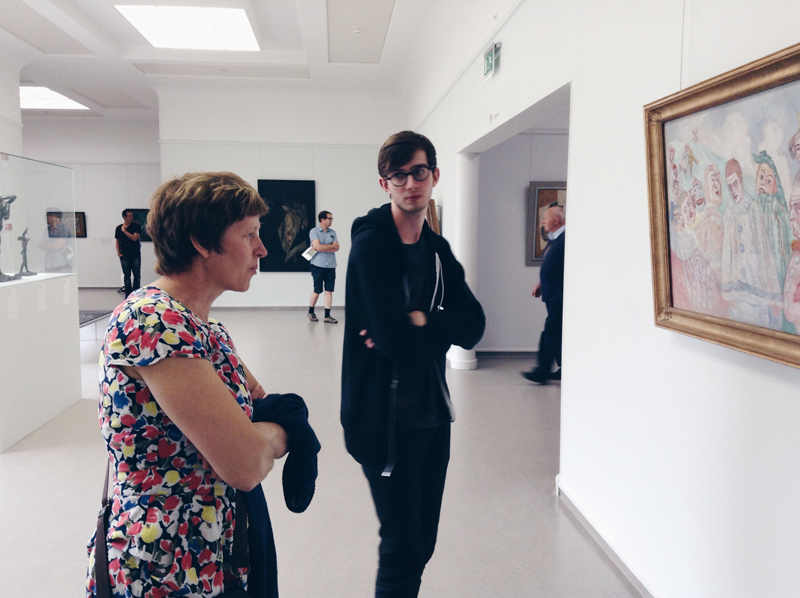 I think we cycled for about ten or fifteen kilometres before heading to the museum that was in the middle of the park, the Kröller-Müller museum. There were lots of paintings and sculptures, most of them from the second half of the 19th century. One of the galleries was entirely dedicated to Vincent Van Gogh, with 91 paintings (like the Terrace of a café at night and the Potato Eaters) and 180 drawings. I think his paintings are really beautiful, I love how they’re not too realistic but still very balanced, and I also like the yellow colours in a lot of his paintings. At the introduction hall there was a computer where you could make a copy of a fragment of a famous painting, and my brother and I had a lot of fun with that. I chose to do a piece of the Composition in colour A by Mondrian, and my brother was a little more ambitious and he painted a fragment of the Potato Eaters by Van Gogh. 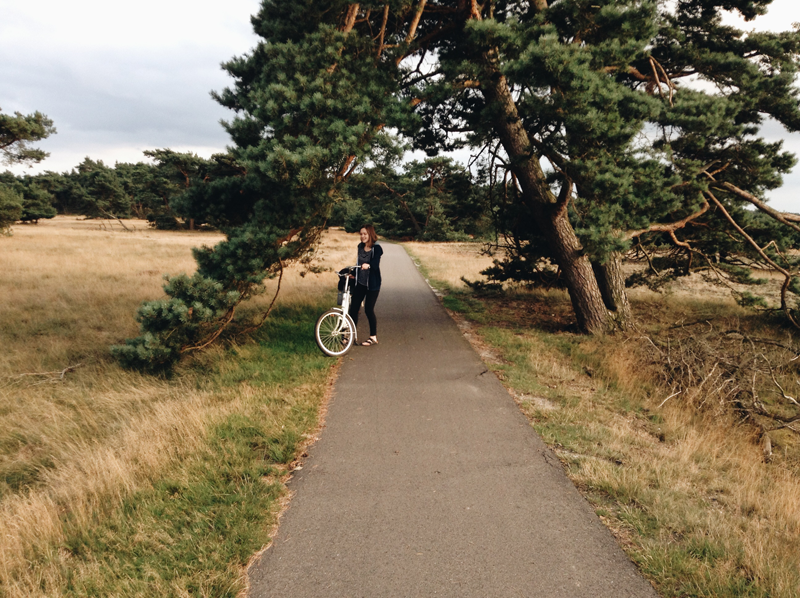 On our way back, we cycled by this plain of drift sand, and all of a sudden it felt like we were in Africa (not that I’ve ever been in Africa, but I would imagine it to look sort of like this). Besides that, we passed by the same kind of woods and fields as in the morning. The sun was setting already, but the temperature was still very pleasant, and we talked about how lucky we were we didn’t get one drop of rain on this entire trip.

So that was my trip to the Veluwe. It’s a good thing to discover that you don’t have to travel that far to see beautiful things like this. So if you live in the Netherlands (or Belgium or Germany) and you’re looking for a short getaway, this is definitely something I recommend! What’s your favourite place to go for a short trip?

29 years old • teaching and researching Swedish literature • into literature, drawing, feminism, travel and other things • in love with Sweden.